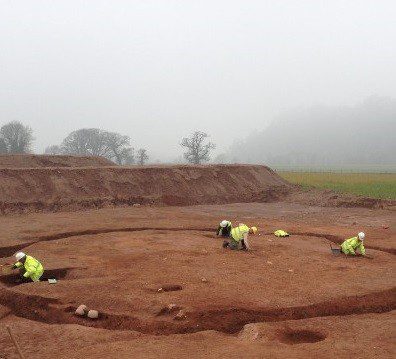 The work was carried out in line with a condition of planning permission for the development of the Ysgol Bro Dinefwr School on behalf of client Carmarthenshire County Council.

AB Heritage Ltd appointed Rubicon Heritage Services Ltd to undertake the fieldwork associated with the project, while the overall project-management was retained by AB Heritage. The fieldwork for the project included a mix of full open archaeological excavation, field walking and hand dug test pitting/sieving, along with machine dug trial trenches and some intensive trial trenching.

The post excavation stages of the project took place in late 2014 and 2015 . AB Heritage led partners in the scoping of the research to be undertaken, the assessment and analysis of the finds from the site and production of final reports.

Community liaison during and after the dig

As part of the commission undertaken on behalf of Carmarthenshire County Council, AB Heritage managed a number of community events during the field work phase, and further post-excavation liaison

During the pre‐determination and excavation phase on site an area to the north of site with known  potential  for  flint  scatters was  identified  and  designated  appropriate for volunteer community engagement.  We also engaged and were visited by school children from both the Pant‐y‐Celyn and Tre‐gib school  campus’, who received tours of the archaeology found on site.

The success of the field walking meant that plans to dig test‐pits across the area went ahead. This involved more opportunities for local volunteers to join in, but were more targeted.

To ensure that the findings at Ysgol Bro Dinefwr continued to be communicated to an audience of academics and the wider general public AB Heritage prepared:

See the birds-eye view film of the site.
Read more:  Meet the Team   I  Our Services   I Our Blogs