A Desk-Based Assessment can help to unravel the unknown history of a site and prepare mitigation proposals. 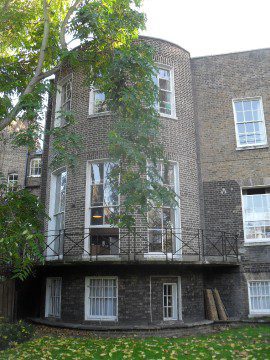 This was likely to be remains associated with former building on the site, which may have included the site of the pound of the Lambeth Manor (now Lambeth Palace). There was also the potential for the recovery of features of all other dates, including others relating to the development of the land surrounding Lambeth Palace.

Within our DBA we proposed that an archaeological evaluation was undertaken in advance of development as this would allow for the investigation of any potential archaeological material beneath the ground, and the development of an appropriate mitigation strategy. In addition, it was proposed that a Historic Building Recording survey be undertaken ahead of the proposed changes to the Grade II Listed Rectory, as this would allow for extant potential to be investigated and/or mitigated.
Images: Facades of 214 Lambeth Road. 2014
Read more:  Meet the Team   I  Our Services   I Our Blogs