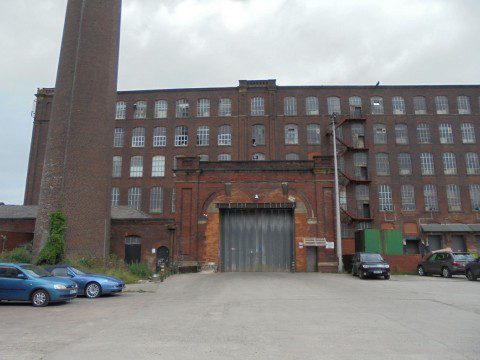 A Heritage Statement is needed to assess the impact of a proposed development on the setting of a historic building.

AB Heritage had been commissioned to produce a Heritage Statement to cover a proposed development within the grounds of the Grade II Listed Lion Mill, a former late 19th century cotton spinning mill, in Royton, Metropolitan Brough of Oldham.

The processing of cotton was an important part of the wider Lancashire and Oldham economy from the 1800’s onwards, with Mills employing significant numbers of people and having significant impact on the financial prosperity of an area. Built in 1890, to designs by Wild, Collins & Wild, Lion Mill was constructed at a time when there was a brief phase of expansion in Mill building, prior to a subsequent decline in cotton processing across the UK in the early 20th century, mainly due to foreign competition.

The proposed development was located within the yard of the Lion Mill curtilage, an area which had originally been occupied by a large reservoir which was used for the steam engine that operated the Mill. The Mill itself ceased production in 1967 and was later re-occupied for commercial purposes which continues to the present day. The former reservoir was eventually backfilled and a hardstanding yard created, now used for vehicle storage and deliveries.

A site visit is needed to assess the current setting…

For the Heritage Statement it was key to identify to what extent the proposed development would impact on the setting of the Listed Mill. AB Heritage visited the site of Lion Mill and surroundings in June 2018 to clearly assess the potential impact of the proposed light-industrial structure to be built in the hardstanding yard to the Mill.

Negligible to Low Magnitude of Impact…

It was concluded that while the general setting of the area was classified as industrial in character, the impact of the proposed development on this setting was classified to be Not Significant to Minor. The Mill building itself was not changed in any way, the only changes would be made of the hardstanding yard at the rear of the Mill. As this area had already been changed intensively from its original historic setting (e.g. backfilling of the reservoir, construction as well as demolition of outbuildings) the changes made by the construction of a light-industrial unit would only slightly change the current setting. It was therefore not necessary to conduct any further works.